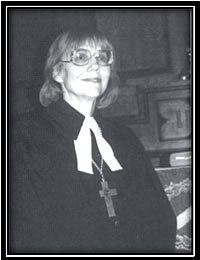 Organist Anita Gaide (Rundane) graduated from the Royal Conservatory of Music in Toronto with a gold medal in organ performance, where she also compelted her ARCT and ARCCO diplomas. She continued her studies in Paris with Jean Langalie and André Isoir, where she also received the Schola Cantorum virtuoso diploma. She has performed in some of the world’s most famous cathedrals: Cologne Cathedral in Germany; St. Paul’s Cathedral and Royal Albert Hall in London, England; the Cathedrals in Cleveland and Ottawa, the Sidney Opera House, and Riga’s Dome Cathedral. She has also participated in 20 Latvian Song Festivals in North America and Europe, in many concerts, as well as in most of the Latvian Organ Festivals. On three occasions, she was the Artistic Director of these festivals. She has performed on the CBC Organists in Recital broadcast series. Her name has appeared in the Who’s Who in Music. From a very young age (approx. 45 years), Anita has held longstanding positions with various churches in Toronto and Holland. Since 1981, she has been the organist at St. John’s Latvian Lutheran Church in Toronto.

Alongside her musical education and professional experience, Anita Gaide has also compelted 6 academic degrees: Bachelor’s and Master’s degrees in English and Latin. She has worked as a teacher and academic counsellor since 1981 and is a member of the Latvian sorority Spidola.

In 1993, she earned her Master’s degree (M.Div.) in theology and in 2003 completed her doctoral studies (Th.D.) and defended her dissertation. She was ordained as a Lutheran minister in 1995. As a minister, she presently works for St. John’s Latvian Lutheran Church and East Toronto Latvian Lutheran Congregation based in St. Barnabas Church in Toronto, where she is particularly involved in their outreach programs for people in need. She has also worked for many years with the Latvian long-term care facility „Kristus Darzs”.