History of Our Church

Founding of the Congregation and Worship 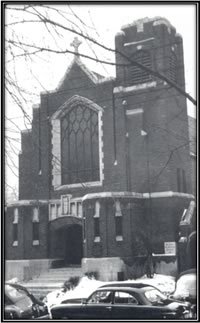 The first worship service of the congregation took place in St. John’s Lutheran Church, 274 Concord Avenue, Toronto on November 18 1948 with the Reverand Adolfs Gaudins leading the service (simultaneously marking the 30th anniversary of the Declaration of Independence of Latvia). Of the several hundred Latvians who had chosen the Toronto area for their new home, two hundred attended the service and the idea was broached for the founding of a congregation for Latvian-speaking immigrants to Canada. By December 12, 1948, area Latvians had founded the first Latvian congregation in Canada with the support of Reverend Ernest Hahn of St. John’s Lutheran Church. The new congregation chose the name Sv. Jāņa ev.-lut. Draudze (St. John’s Evangelical Lutheran (Latvian) Congregation).

Of four candidates for pastor of the new congregation, Arnolds Lusis, who, at the time, was still in a displaced persons’ camp in Germany, was chosen.

On this occasion, the first council was also elected under the leadership of Oskars Dzervitis. Pastor Lusis’s first worship service took place on August 28, 1949 with R.N Bryson, the consul of Latvia in Canada and 400 worshippers in attendance. Rev. Lusis’s investiture took place on September 11 of that year.

With the material support of the Missouri Synod of the Lutheran Church, the congregation was able to hold services in two of its member churches: St. John’s and Trinity Church on Sherbourne Avenue for many years.

During the 1950s and 1960s, the congregation enjoyed vibrant growth with the addition of many working groups: Sunday School, Women’s Auxiliary, the Good Samaritan group, choir, youth group and ‘Saulaine’ the country retreat and children’s summer camp.

Soon the idea of finding a permanent home for the growing congregation was broached. 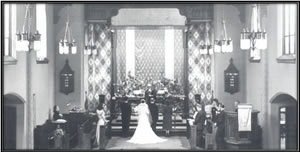 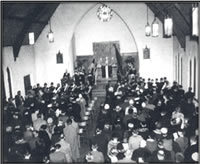 One thing I have desired of the Lord, that will I seek after;
That I may dwell in the house of the Lord
All the days of my life,
To behold the beauty of the Lord,
And to inquire in his temple. Ps. 27:4 (KJV)

Although the congregation was grateful for the use of St. John’s Church on Concord and Trinity Church on Sherbourne, services there presented certain limitations, such as the need for afternoon services. As early as 1956, the council recognized the need for the congregation to have its own church building and thus passed motion that each member of the congregation make a monthly donation of 50 cents toward the acquisition of our own ‘home’.

After an initial effort at buying an existing church for $120,000 (the offer being turned down), it was decided to look for a property in an established neighbourhood and to construct a new building to our own specifications. An appropriate property was located at 200 Balmoral Avenue and purchased for $47,000. A very large house stood on the property and was used by numerous Latvian organizations for meetings, etc., until it was demolished for the construction of the church.

By the time that Egils Tannis’s design for the church building was finished and accepted by the council and congregation (1962), the purchase debt was paid off and the congregation had donated another $50,000 toward the anticipated construction costs of $ 146,000. (The final cost was $220,000 with all interior finishes.) Permits in hand, John Goba’s construction company was voted the contract and the actual builders were Latvians under the leadership of A. Dobelis.

On March 8, 1964, by the Grace of God and to His Glory, Archbishop Dr. Karlis Kundzins of the Evangelical Lutheran Church of Latvia consecrated the building.

Not only did the congregation donate the needed finances for the construction, but various groups and individuals presented gifts for the occasion:

There were many other gifts, and over the years the congregation has built up a collection of paintings which were gifts of artists who held their exhibitions in the church.

It was, however, the stone memorial, designed and carved by the sculptor Augusts Kopmanis in front of the church tower and the main entrance of the church that spoke most deeply to the Latvian congregants of St. John’s.

It shows a family of refugees in relief with a separate stone bearing the inscription:

In praise of God
this church was built by Latvians who left their homeland seized by the godless.

Let it remind all Christians:
Stand fast...and be not entangled again with the yoke of bondage. 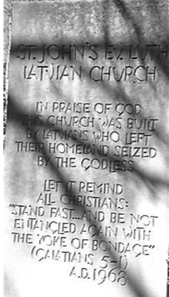 The full history of St. John's Latvian Lutheran Church is available in Latvian.